While manufacturers’ individual requirements will vary, China performs strongly thanks to increasing Government investment in the adoption of technology, while the United States is most attractive for those seeking to minimise exposure to economic and political threats.

The report reveals that China is the leading country when viewed from a baseline scenario which gives equal importance to a country’s operating conditions and cost competitiveness. The United States is in second followed by Taiwan, India and Canada making the top five. The Czech Republic is the highest ranked European country in sixth with Poland, Lithuania and Hungary also featuring highly.

When the data is looked at from a cost scenario - which gives a higher score to countries where operating outlay, including labour costs, is lower - China remains on top with Asian countries dominating the top 10. Only Lithuania and Romania, in eighth and ninth respectively, feature prominently from elsewhere.

The third ranking - the ‘risk’ scenario - takes into account rising geopolitical risk by favouring countries with lower levels of economic and political threat. In this scenario, North America leads the way with the US and Canada first and second respectively and China slipping to fifth. European locations account for half the top 10, led by the Czech Republic, which places fourth in the index, with Germany, Denmark, Finland and Austria also featuring in the top 10. 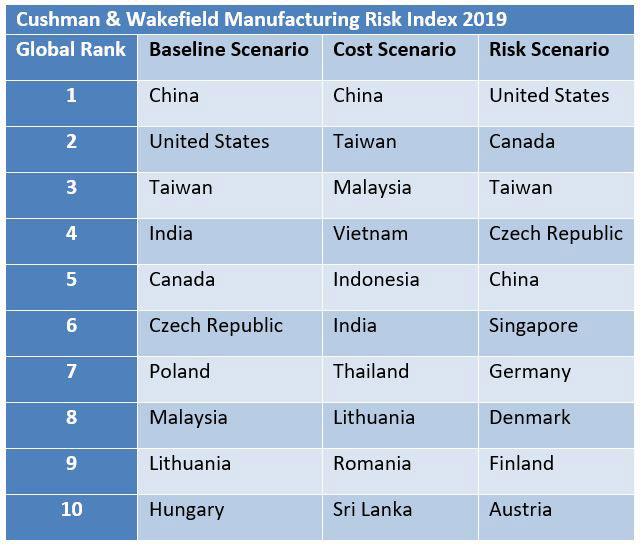 “The US and Canada also feature prominently as attractive locations for manufacturing requiring skilled labour and manufacturers who value economic and political security in particular. Poland remains in the top tier in seventh place for overall operating conditions (of European countries, only the Czech Republic is ranked higher in sixth). Risk of operating in Poland continues to be considered relatively high. Improvements to investor perception would help Poland be ranked higher and attract new investments - Joanna Sinkiewicz adds.

Do You Have Any Questions?

We use cookies to optimise site functionality and give you the best possible experience.

This site uses cookies to store information on your computer.

Some of these cookies are essential, while others help us to improve your experience by providing insights into how the site is being used.

We use marketing cookies to help us improve the relevancy of advertising campaigns you receive.

We use some social sharing plugins, to allow you to share certain pages of our website on social media.